Recently I did an inspection on a home built in the 1950’s. With pre-1980 and pre-1960 construction there are various items that a home inspector will be extra observant for. In this particular inspection I came across a Federal Pacific Stab Lok electrical panel and breaker system.

The concern for Federal Pacific was that even in the off position, the breakers were known to “trip”, but could still be sending power to the house wiring, switches, and receptacles. This presented a risk of electrocution or fire.

Zinsco breakers were known not to “trip” as designed and melt circuits and cause fires due to excessive heat. Zinsco panels might also be labeled as “Sylvania” or “GTE Sylvania”

As a home inspector, it is our responsibility to the home buyer to call this out as a potential defect that should be evaluated by a qualified licensed electrical contractor. The electrical contractor may or may not recommend replacement of the panel and breakers, but for the safety of the home buyer a responsible home inspector should call this out. 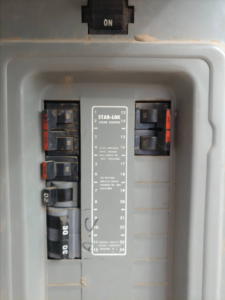 Should you get a home inspection when buying an “As Is” property?
Modified Truss Chord
0 replies

Want to join the discussion?
Feel free to contribute!

TVHI is now an InterNACHI Certified Professional InspectorWhy Do a Pre-Listing Home Inspection?
Scroll to top